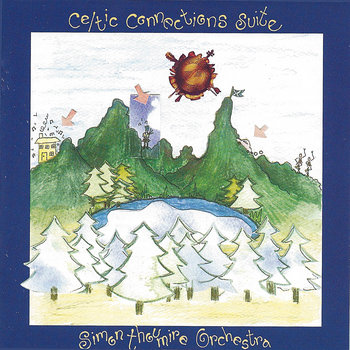 Back in 1996 I had an idea. It was an idea to write a piece of music that would open the Celtic Connections Festival Club. It would be a long piece of music but apart from that I had no other ideas. I had never written anything apart from 16 bar tunes in the past so I don’t know where it came from. Anyway I decided to write the idea down on paper and send it to Colin Hynd at Celtic Connections Festival. I can’t remember exactly what it said but I basically asked if he could commission me to write this piece of music. Colin Hynd is great at making things happen and I was lucky that he must have seen merit in this idea and he said YES! This was before the birth of the New Voices strand that is a big picture of Celtic Connections nowadays (since 1997).

When I got the go ahead I basically set out with some manuscript, a four track tape recorded and my concertina and I imagined the Celtic Connections Suite. I bounced tracks all over the place on the tapes (as was done in these days!) and eventually came up with 3 pieces – Celtic Connections Club, Fiesta in the Highlands (after a Live Music Now trip to Lochinver) and the World Bagpipe Championships. I got nine musicians together including (two drummers (Iain Copeland and Tom Bancroft) and we rehearsed in a dressing room in the Glasgow Royal Concert Hall.

I still remember the elation of it all going well on the night and everybody in the crowd seemed to enjoy it. It encouraged me to continue to write more music which in turn set me up for taking chances. We performed it again the year after as part of the very first New Voices series alongside Dave Milligan and Corrina Hewat’s two pieces of new music. Thanks to Colin Hynd for his initial belief!

Can you help me to do what I love (and hopefully everyone you do too) by supporting my Patreon page? Three tiers – $1, $5, $10 – with great benefits. Visit my page here.
Become a Patron!

If you would like a 1-1 concertina lesson you can get me via Skype. Lessons cost £30 for 30 mins. Payment is via PayPal before lesson. If you are interested please contact me here.